The Benefits of Using Picking Platforms

Many growers and orchards are continually looking for new techniques and equipment to improve efficiency and yields at the end of each harvest. Harvests usually involve a large percentage of an orchard’s labour costs. As such, reducing these costs carry considerable benefits. Aside from helping growers cut costs, it allows them to reallocate resources elsewhere; they can invest in other operations on the plantation or orchard.

One of the most useful tools in fruit harvesting is the Hydralada elevated work platform. Picking & pruning platforms have the potential to boost your overall yield and productivity while reducing labour costs. Though gains in efficiency may vary due to differing factors, picking platforms have been known to boost output by up to 300%, while keeping your workers safe during the picking, pruning & thinning process. 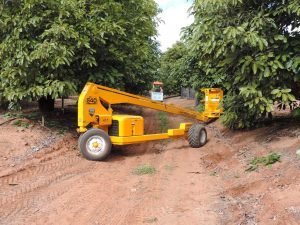 The Benefits of Using Picking Platforms

Mechanisation in harvesting has traditionally resulted in a productivity increase. It has been estimated to increase overall productivity by up to 300 per cent. Picking platforms are a crucial component of this growth, mainly because they allow people to move quickly and safely from tree to tree.

The work is far less physical than using bags or ladders. Some estimates show that 75 per cent of work is used moving and setting up ladders. With platforms removing such difficulties, the result is that workers are less exhausted, and they have enough energy to maintain their output throughout the whole week (and, the whole season). A platform trial conducted on Ceres orchards revealed that using platforms over ladders caused a 300 per cent increase in labour efficiency. During seasonal peaks, workers can do more without succumbing to burnout and exhaustion.

Platforms also allow those who have difficulty picking or using ladders and bags to work, as the platforms eliminate many physical barriers. Growers can expand and diversify their pool of workers this way. Employing a more diverse and varied workforce also allows you to hire more than one person in a family, which can create a strong sense of community with your workers.

Workers are also able to learn more from each other because the simplified operations allow them to focus more on the task at hand and trade tips with each other. Workers often work in small teams, with a ground team, and a person in a platform to perform the higher work.

Need high-quality machinery and equipment for farming and agriculture? A.I.M. Sales distributes a wide range of solutions to help growers optimise their operations. Contact us today.

We welcome the
chance to serve
you also!

We welcome the chance to serve you also

AIM Sales is a family owned business with an Australia wide network and dealerships. We manufacture and distribute Hydralada EWPs, Tow and Blow frost fans, forward bin tippers, orchard picking ladders and Nally MegaBins. Our staff have an unparalleled personal commitment to deliver exceptional service to ensure that your experience with AIM is positive.

We value what’s important to you, and that’s why we deliver honesty, transparency, accountability and reliability in all our dealings with you.