“A wind machine that brings efficiency, affordability, and mobility to frost protection.”

The Tow & Blow Frost Fans Are The Ultimate Solution To Combat Frost.

With the mobile wind machine's portability, our frost fans can be relocated quickly to protect different areas of your vineyard, orchards, and crops. Plus, the Tow & Blow Frost Fans swiftly adjust to suit prevailing winds and can be positioned within the terrain for maximum protection.

Frost Protection in the Winter & Cooling in the Summer

Our Tow & Blow Frost Fans and wind machines are extremely useful and versatile in protecting your crops all year round - with applications for the winter through to the summer.

During the Winter and colder months, Tow & Blow Frost Fans help prevent frost formation on your vineyard, orchards, and crops - protecting the agricultural harvests that you’ve spent months and years on growing! We have confirmed reports from Australian growers that have protected five plus hectares in severe frost conditions. During the summer months, the Tow & Blow Frost Fan wind machine is also highly useful, being perfectly suited for general ventilation and cooling applications in abattoirs and protecting crops against excessive heat burning plants. Other applications of our Tow & Blow Frost Fans or wind machines in the warmer months include drying fruit pre-harvest and before pruning. Plus, Tow & Blow Frost Fans can be fitted with an evaporative water mist system for cooling livestock or people.

With the Tow & Blow frost fans adjustable fan head angle this mobile wind machine is well suited to all types of crops - including avocados, almonds, cherry or fruit orchards, nurseries, plants, trees, vineyards, as well as crops on valleys or hills. The unique design of this fan can provide maximum frost protection on large hectares of land. Stabiliser support feet are lowered to a secure position and the machine levelled for operation.

You can easily angle the Tow & Blow frost fan impeller, as well as horizontally swing the fan head to exponentially increase the area for frost protection.

The versatility that the Tow & Blow wind machine provides completely sets this machine apart from traditional frost fans. Whether you’re after vineyard frost fans or frost fans for orchards in Australia or NZ, you’ll experience reliable frost protection even in the chilliest of months with our frost fans & wind machines at AIM Sales.

Our Tow & Blow frost fan wind machines include an auto start/stop option as a standard feature, meaning it turns on and off automatically based on the temperature - reducing unnecessary energy expenses and providing maximum cost efficiency.

The Tow & Blow frost fans are more efficient than conventional frost control methods in the horticulture and viticulture industries, using only 5 litres of diesel per hour.

The low fuel consumption not only ensures low emissions but significant savings on costs on your agricultural harvests for years to come.

The Tow & Blow wind machine is among the best portable frost fans in Australia & New Zealand. Easily transported from block to block behind a vehicle or tractor, the Tow & Blow Frost Fan wind machine raises the bar in terms of manoeuvrability, flexibility, and affordability.

As this machine is portable, no council approval, building permit, or consent is required - nor are any foundations needed. Due to the Tow & Blow Frost Fans narrow wheelbase, the wind machine can be positioned between the rows of your vineyards, orchards, and crops, eliminating the need to remove any vines or trees to allow for this protection.

Servicing is simple. The boom is lowered to ground level to service the engine and impeller. Extended fuel lines available for remote fuel tanks set up.

The Tow & Blow Frost Fans are unprecedented in frost protection for vineyards and orchards, with results showing that the machine operates at half the noise level of any other wind machine in the world. It is difficult to hear at 300 metres, hence reducing any interference with neighbouring properties.

The tower and fan-head can oscillate through any angle or rotate a full 360 degrees.

The hydraulic functions of the Tow & Blow Frost Fans are driven by a DC hydraulic power pack. Rotation and oscillation functions are controlled by a DC electric drive.

A solar panel provides backup charging to the battery when the fan is not in use. 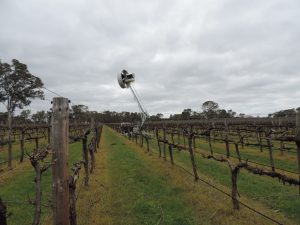 Hydraulic lift. The tower has three height positions to enable operation at lower heights if required. Suitable for valleys and hills. 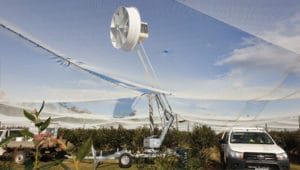 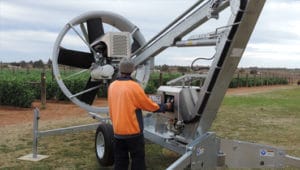 Tow and Blow fans effectively protect large areas across many crop types
Fully Adjustable rotation and head angle; can be used on hills and in valleys
Efficient protection of large areas, using only 5L Diesel per hour
Powered by world class Kohler 24 HP three cylinder diesel engine
Fans can be fitted with Extended Fuel Lines for longer running times
Tow into position using a tractor or vehicle, no need to remove posts, trees or vines
Once in position, stabiliser legs are extended and the machine levelled, then its ready for operation
Fan can be set to rotate 360 or oscillate across an arc, depending on the area they are protecting
Temperature controlled auto start technology, fan automatically starts when temperature drops below the set temperature
Shrouded Impeller boosts efficiencies of up to 90%
Automatic start / stop through the diesel engine controller
SPECIFICATION DOWNLOADS
SPECIFICATION
DOWNLOADS 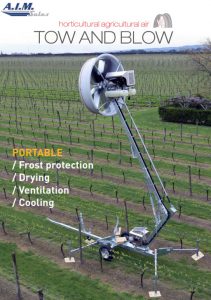 Reach out to us today for a free quote

The bins arrived today as expected. Your service is fantastic, quick efficient and helpful at all times. Thanks again and I’m sure we’ll be needing more in the future, and will certainly be in touch.

Thank you for your customer service, quick turn around with the correspondence and looking after the delivery.

We LOVE these bins. They are so incredibly useful at the farm. We are good for now but I do foresee a possible order for more down the road. Thanks for checking in!

The ladders arrived lunchtime Wednesday as you said it would. It is exactly what I needed I am very impressed so thank you very much for your great service.

The Tippers fitted our purpose and were higher specs that the ones we had been using. We’ve now purchased 2 with another 2 on order. They do everything we ask them to do, fit for purpose

I am pleased to say Vitex has thoroughly enjoyed working with your company and your products are of great quality for the healthcare and pharmaceutical industry.

I wanted to take the time to thank AIM Sales….From engagement to delivery, the service received was; personal, prompt, accurate and expedient. Accuracy and expediency are time savers that positively affect the bottom line of all businesses. You and the team have nailed supply chain management and customer service.

AIM Sales service was very good. We use the bins to transport foliage and flowers to Melbourne and interstate. They are very handy, useable and durable

I really appreciate the effort your team had made to get this [solid picking bins fitted with tipping bars with a fast turnaround time] done. I am sure to be in touch again when I need further supplies. 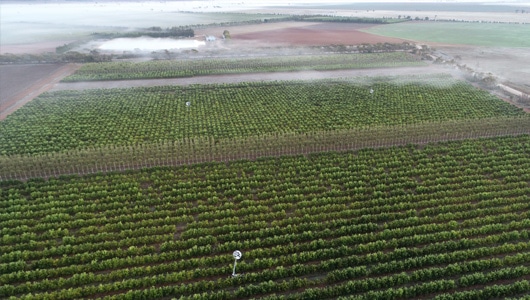 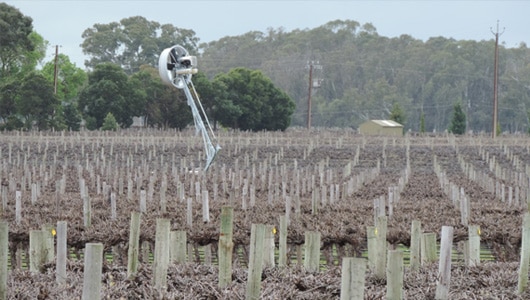 Portable & easily transportable Frost Fan; with no need to remove vines or rows to install & use. 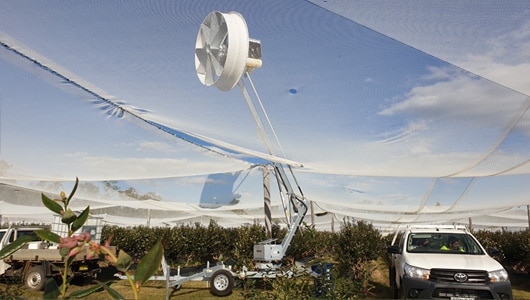 AIM Frost Fans can be used under netting to protect crops, the fan is positioned under nets and then boom is raised. 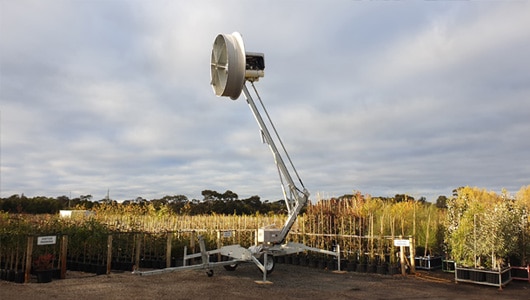 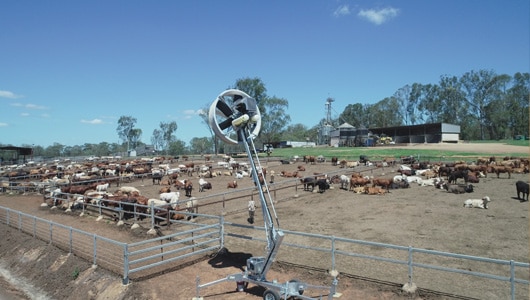 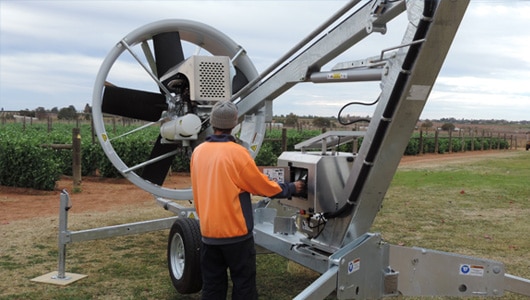 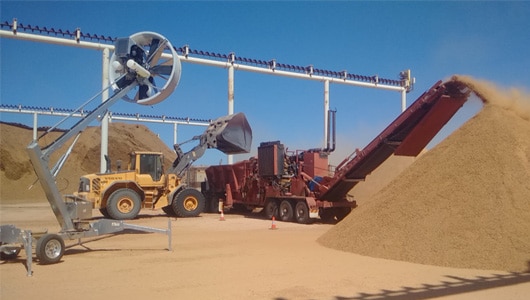 The frost fans can also effectively be used for Dust Suppression, such as in an almond husking plant

Have Questions on our Tow & Blow Frost Fan Wind Machines?

AIM Sales is a family owned business with an Australia wide network and dealerships. We manufacture and distribute Hydralada EWPs, Tow and Blow frost fans, forward bin tippers, orchard picking ladders and Nally MegaBins. Our staff have an unparalleled personal commitment to deliver exceptional service to ensure that your experience with AIM is positive.

We value what’s important to you, and that’s why we deliver honesty, transparency, accountability and reliability in all our dealings with you.